Why our brains need breaks to maintain productivity

We’ll dig into the new research on why our brains need breaks, looking at the case for taking breaks, as well as the benefits of breaks for productivity.
Dom Murray, Content Writer
2021-11-18

Picture two co-workers. The first is busy all day, racing from meeting to meeting, replying to messages, staring down a to-do list, and barely taking a second to breathe. The second appears to have time on their side, working at a methodical pace and taking regular breaks between tasks. Who do you think is more productive?

Conventional wisdom suggests the first person is more likely to be productive. After all, the more time you spend working, the more you’re likely to get done, right? Many of us have been conditioned to believe in this ‘work til you drop’ attitude.

In reality, the second person, who opts to take regular breaks, is significantly more likely to be productive, as they give their brain the time it needs to reset and process information. New research by Microsoft finds that taking regular breaks decreases the risk of employee burnout while also improving focus and engagement and helping people manage stress. In this case, the old adage rings true: work smarter, not harder.

Unfortunately, many people probably relate more closely to the first person in this scenario. You might even know the feeling: you work and work, until sometime in the afternoon after yet another Zoom meeting, you feel the tension build up in your temples or the stress pool in your stomach. This way of working is unsustainable and, ultimately, unproductive.

We’ll dig into this new research on why our brains need breaks, looking at the case for taking breaks, as well as the benefits of breaks for productivity.

The case for taking breaks

Sometimes, ‘break’ can be a dirty word in our breakneck, fast-paced modern culture. When you’re always on the go, facing various deadlines and pressures, it feels like there’s no time to take a break. Microsoft’s 2021 Work Trend Index report backs this up, finding that 54% of respondents feel overworked, while 39% say they are outright exhausted.

Many feel the pressure is always on to be succeeding, achieving, and boosting their productivity. There’s no time for a break — I’ll sleep when I’m dead! However, when we step back, take a deep breath, and critically evaluate this mindset, we realise it couldn’t be further from the truth.

The case for taking breaks is clear-cut. Put simply, our brains are designed for sprints, not marathons. They need time to rest, reset, and consolidate knowledge. Without this, our brains cannot function optimally. It is often during these moments when we are not actively thinking about anything that our best ideas suddenly come to us — those brilliant ‘lightbulb’ moments. 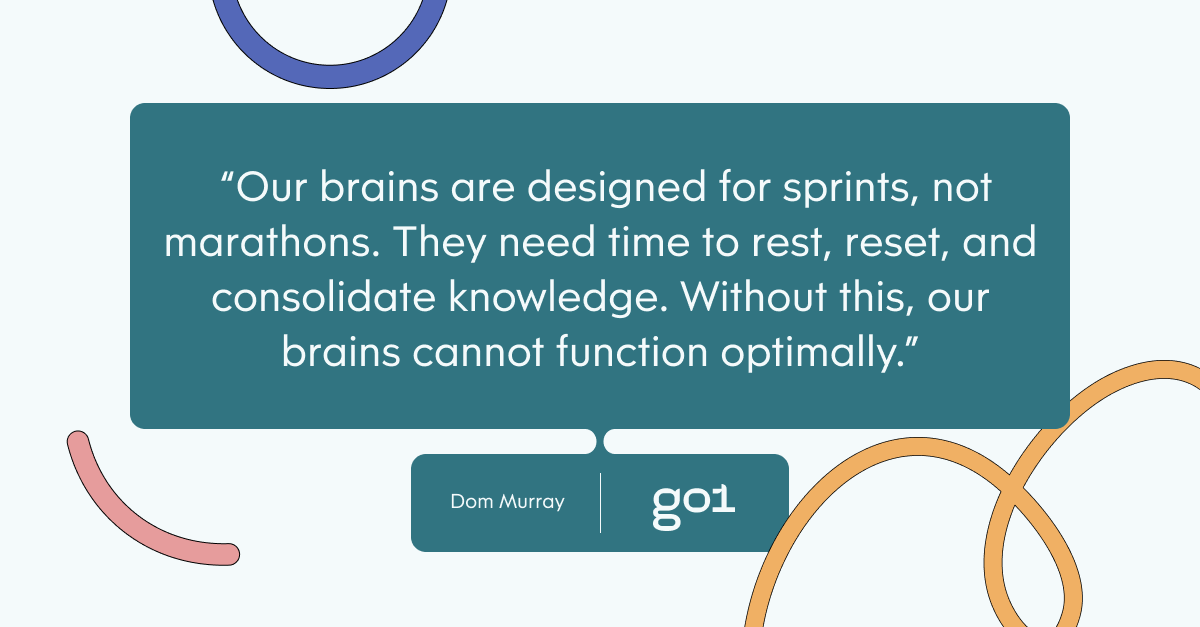 This phenomenon is no coincidence. As Psychology Today explains, “the frontal lobe brain networks — responsible for reasoning, planning, decision-making, and judgment — work for you in creative ways when the brain is quiet, not while you are effortfully trying to find a solution to a problem. Moments of insight increase as the brain unwinds. Why? When not actively tackling a task, the brain connects random ideas and consolidates these with prior knowledge into exciting new thoughts, ideas, directions, and potential solutions.”

In other words, those moments when you’re putting in all your effort but running into a mental block often signal that you need a break. Increased effort does not necessarily correlate with increased productivity. In fact, this mindset is worth debunking. Obviously, you are more likely to complete a task if you work on it for 25 minutes than if you work on it for 2 minutes. However, as with many things in life, you will eventually reach a point of diminishing returns. For example, working on a task for 3 hours straight does not guarantee a better outcome than breaking that work up into four 30-minute increments. At a certain point, your brain will be crying out for a break. 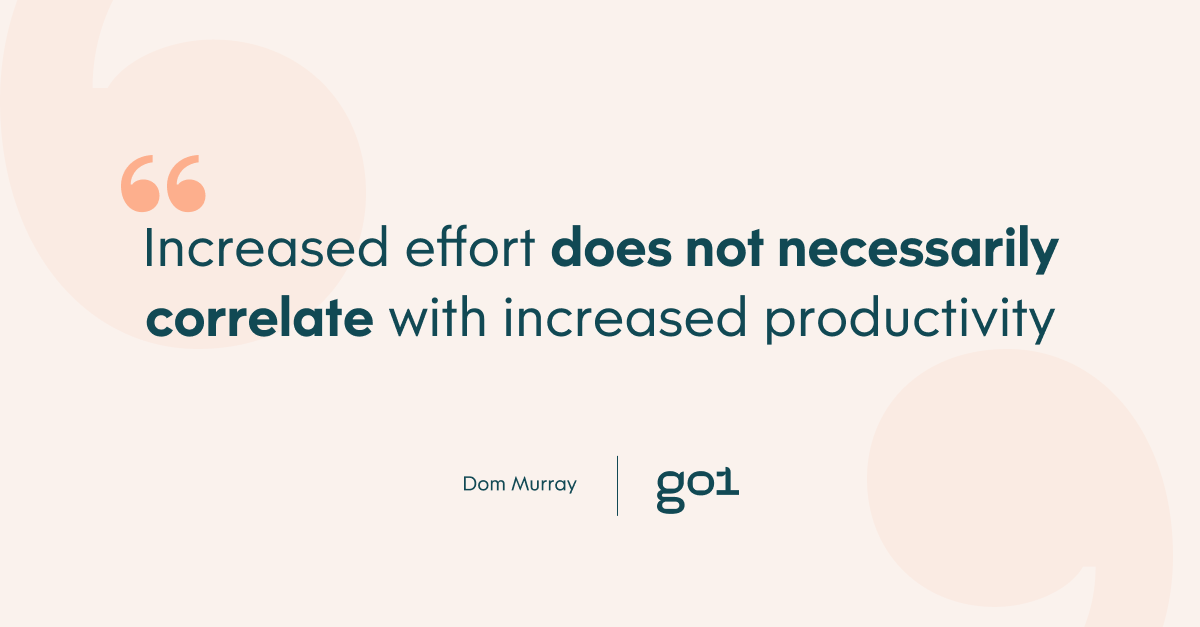 Numerous studies have attempted to quantify the benefits of downtime for our brain health. One such experiment, conducted by Marc Berman in 2008, saw 38 university students study lists of random numbers, then recite these numbers from memory in reverse order. Next, half the students took a walk in a botanical garden for an hour, while the other half walked the same distance through busy, heavily trafficked city streets for an hour. The students then memorised and recited the lists again. On average, students who walked through nature recalled 1.5 more digits than the first time they took the test, whereas those who walked through the busy city streets improved by only 0.5 digits.

This study shows the benefits of downtime for our memory, focus, and attentiveness. Similar patterns have been observed in school students. A 2016 study by psychologist Karrie Godwin found that, during longer lessons, young primary school students were distracted about a quarter of the time. However, during shorter lessons, with more frequent breaks, attention and engagement skyrocketed. Ultimately, they determined that it was more effective to give students more breaks, settling on several 10-minute lessons rather than fewer 30-minute lessons.

On a larger scale, a similar pattern is evident in studies of the 4-day workweek. One study from Iceland found that when workers reduced their hours from 40 to 35 per week, productivity stayed constant or rose in most workplaces. Likewise, Microsoft Japan tested a 4-day work week and saw productivity increase by 40%.

While this might seem paradoxical, giving workers more breaks allows them more downtime to rest, reset, relax, and ultimately increase productivity. In these instances, less is definitely more.

The benefits of breaks for productivity

As anyone who has ever had to work long shifts will tell you, breaks are beneficial for many self-evident reasons: mental health, physical health, memory, and even attentiveness. Plus, who doesn’t like taking a 10-minute break to grab a coffee and a snack? When it comes to productivity, taking regular breaks is equally important. While this might seem counterintuitive to some people — how can working less be more productive? —  a recent Microsoft study analysed the benefits of taking breaks, concluding that our brains need regular breaks to maintain productivity.

During the study, 14 people attended Zoom meetings while wearing electroencephalogram (EEG) equipment — a cap to monitor the electrical activity in their brains. On the first day of testing, participants attended four back-to-back half-hour meetings, all on different topics. The following day, these meetings were interspersed with 10-minute breaks, during which time the participants completed a guided meditation.

We all know the feeling: you’re on your third consecutive meeting, your colleague is presenting an important slide deck, you’re trying your best to focus, but your mind keeps wandering, eventually drifting off into daydreams. Luckily, science now backs up these feelings.

According to Microsoft’s research, participants who took meditation breaks between meetings showed brainwave patterns with positive levels of frontal alpha asymmetry, which correlates to higher focus and engagement.

In contrast, participants who didn’t take breaks had (you guessed it!) negative levels of frontal alpha symmetry, suggesting negative engagement during the meeting.

Put simply, not taking breaks between meetings made it far more difficult for people to focus.

According to Michael Bohan, who oversaw the research, this is because “you’re coming to the end of the meeting, knowing you have another one coming right up, and you’re going to have to switch gears and use your brain to think hard about something else.”

“Our research shows breaks are important, not just to make us less exhausted by the end of the day, but to actually improve our ability to focus and engage while in those meetings,” he adds.

Ultimately, the message is clear: to maintain focus and engagement, reduce stress, and improve productivity, breaks are vital. To function at your best, breaks should be factored in as a regular part of your daily workload; just like checking your emails, replying to Slack messages, and attending meetings. 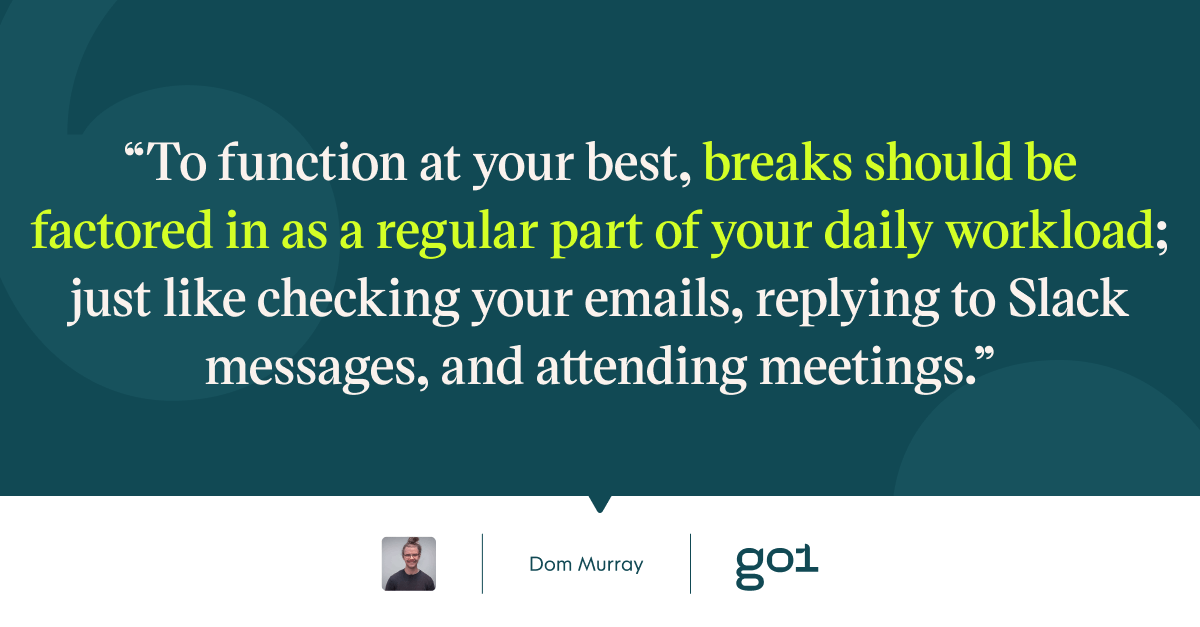 While old-school thinking may perceive taking a break as lazy or unproductive, nothing could be further from the truth. In reality, breaks are one of the best productivity tools in your arsenal. So, next time you hit a brick wall at work, remember this breaking news: your brain needs breaks, and so do you.

For more insights, be sure to subscribe to the Go1 newsletter to stay on top of all the latest L&D trends. Or, you can check out our articles on scheduling breaks to increase productivity and why you need to switch off from technology during your break.