The benefits of mLearning over eLearning

mLearning’s potential is almost limitless. With this in mind, we’ll ask the question on everyone’s lips: what are the benefits of mLearning over eLearning?
Dom Murray, Content Writer
2022-10-20

It’s no secret that we live in a mobile-first world. To prove this point, there’s a good chance you’re reading this article on your phone right now. If not, your phone is most likely within arm’s reach, especially if you’re among the 90% of Millennials who say they have their phones on them 24/7.

Over the years, we’ve focussed heavily on eLearning on this blog — whether it be the benefits of eLearning, the impact of eLearning, or tips for creating a stress-free eLearning environment. And, of course, eLearning isn’t going anywhere. However, in an increasingly mobile-first society, it has become paramount to add another prong to your learning strategy, focusing not just on eLearning, but on mobile learning (mLearning) too.

Already, the average person spends 3 hours and 15 minutes on their phone per day, checking their phone 58 times. Research by Google breaks this down further, finding that 80% of people own a smartphone, while people are almost twice as likely to solely use a smartphone (27%) than solely use a computer (14%). What’s more, 65% of all digital media is viewed on smartphones. 91% of the time spent on smartphones is spent using apps, of which about 50% is used for some form of learning.

In other words, mLearning’s potential is almost limitless. With this in mind, we’ll ask the question on everyone’s lips: what is mLearning? Following this, we’ll outline five key benefits of mLearing, demonstrating why it is essential for any modern, forward-thinking L&D team.

What is mobile learning (mLearning)?

Mobile learning, otherwise known as mLearning, is any form of learning that occurs on a smartphone, tablet, or other mobile device. mLearning can take many forms, from compliance training to upskilling to microlearning, and everything in between. mLearning’s convenience and versatility mean it’s especially valuable for microlearning, with estimates suggesting it will be the most popular form of microlearning by 2025. mLearning contrasts with eLearning, which takes place on a laptop or desktop computer.

Easy LMS expands on this definition, explaining that mLearing is “a new way to access learning content using mobile devices. It’s possible to learn whenever and wherever you want, as long as you have a modern mobile device connected to the internet.”

Likewise, eLearning Industry defines mLearning as “a broad term that refers to the process of learning via the internet or network using personal mobile devices such as smartphones, tablets, laptops, and digital notebooks. Mobile learning has been around in one form or the other since the early 2000s but soared in popularity a few years ago because it allows students access to education anywhere and anytime, provided they have a mobile device.”

The future of mLearning

This final point is significant, as mLearning’s popularity has grown exponentially in recent years. According to the Global Mobile Learning Industry Report, mLearning is the fastest-growing market in the learning sector, with an average growth rate of 20% year-on-year. The global mLearning industry was valued at $22.4 billion in 2020 and is projected to reach $80.1 billion in 2027. For context, the global eLearning market was worth $215 billion in 2021.

While mLearning’s vast popularity might come as a shock initially, if you stop and think, you may realise you are already engaging in mLearning without even realising it. As mentioned, 64% of all digital media is viewed on mobile devices, while approximately 50% of the time people spend on mobile apps is dedicated to learning.

If this sounds high, ask yourself: do I listen to podcasts that teach me something new? Have I ever looked up a how-to tutorial on YouTube? Have I downloaded an app to learn a new language? Or an app to help me manage my money or learn about investing? Perhaps even a brain training app to keep me mentally sharp? If the answer to any of these questions is yes, you’re already engaging in a form of mLearning.

The best part is that mLearning can take place anywhere. As such, mLearning is far more versatile than eLearning. A survey by Merrill Lynch found that learners complete mLearning modules in a variety of different locations, such as:

Still, this leaves 13% of teams who don’t already offer mLearning and don’t plan to implement mLearning in the next two years. If we haven’t already convinced these holdouts, read on to discover five key benefits of mLearning.

When in doubt, it’s a good idea to give your learners what they want. And when it comes to mLearning, learner preferences are resounding. 64% of learners want training to be accessible on their mobile devices — with many adding that this isn’t just a preference but an essential need.

If that wasn’t resounding enough, a study by Merrill Lynch found that 99% of participants believe mobile instruction supports their learning. But don’t just take our word for it. In that same study, learners put the benefits of mLearning into their own words. 75% of learners identified convenience, time savings, and training with no distractions as the key benefits of mobile learning.

Additionally, 71% of Millennials say they connect more with mobile learning than L&D activities delivered via desktop or other formal methods. Taking this a step further, 46% of learners use mobile learning before they go to sleep at night!

The benefits of mLearning don’t stop with giving learners what they want, as implementing mLearning can also positively impact learner engagement.

According to Course Method, after implementing mLearning, 72% of users report increased engagement with the learning materials. Further, the average completion rate of a mLearning course is a massive 82%.

If learners want more mLearning opportunities and mLearning increases learner engagement, then it follows that people will also be motivated to spend extra time learning.

According to a study by Capterra, mLearners typically study for 40 more minutes per week than people who complete traditional eLearning courses.

People don’t just spend more time learning — they also improve knowledge retention thanks to mLearning. According to a report by Lynda, “one global pharmaceutical company achieved a 53% improvement in knowledge retention among staff members by using mobile learning to introduce a new product.” 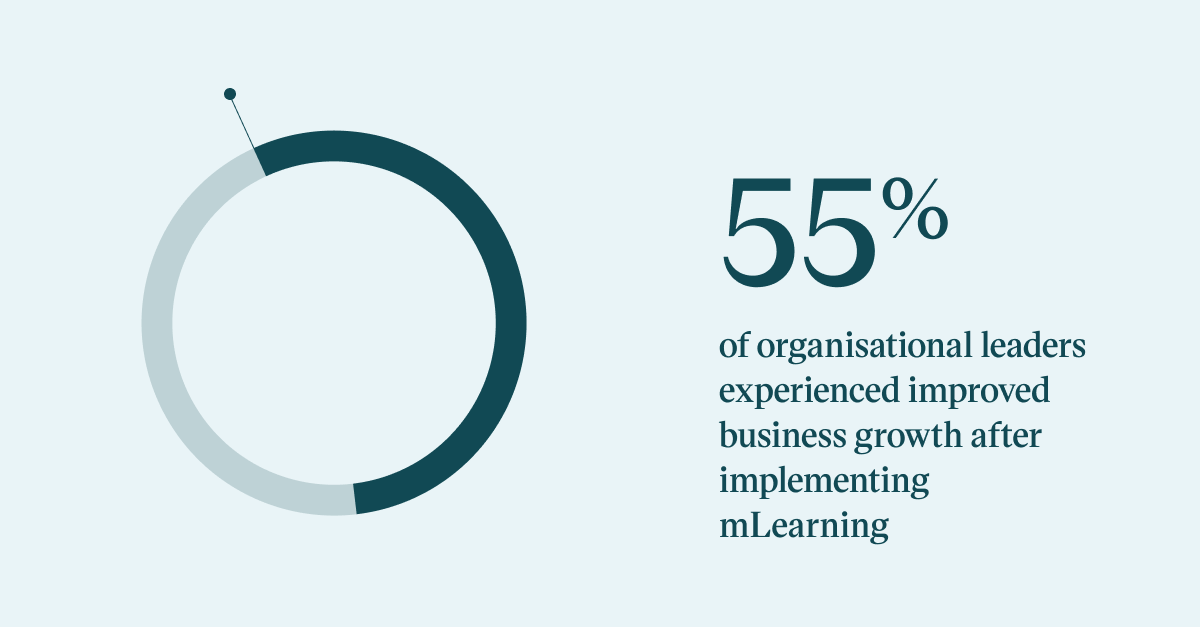 70% of learners say they are more motivated when they can complete a course on their smartphone.

For more insights, subscribe to the Go1 newsletter today to stay on top of all the latest L&D trends. Or, you can book a demo to find out how Go1 can help with your team’s learning needs.