Where does a 4-day week fit into the future of work?

We’ll examine how a 4-day week may fit into the future of work, analysing the pros and cons of this model for businesses and employees.
Dom Murray, Content Writer
2022-02-24

Since the beginning of 2020, work has changed monumentally for many employees. Almost overnight, hybrid and remote working became the norm as lockdowns forced businesses to adapt quickly. However, despite these major overhauls, the most significant changes may still be on the horizon. In 2022, less could be more when it comes to working.

The 4-day work week has been a hot topic for several years. Many businesses have successfully trialled this model, while a few have even adopted a 4-day week permanently. Now, as businesses need to be more agile than ever and workers ask for greater flexibility, calls for a 4-day work week are gaining momentum. As such, the 4-day week could be the next evolution in the future of work. 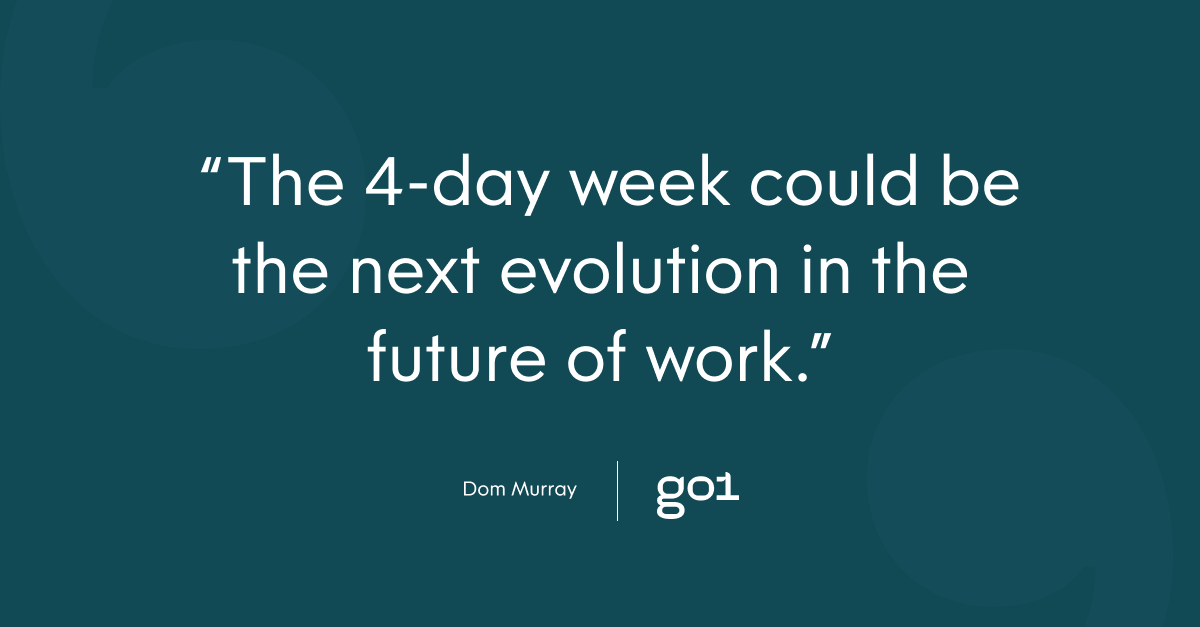 With this in mind, we’ll examine how a 4-day week may fit into the future of work, analysing the pros and cons of this model for businesses and employees. Is the 4-day work week too good to be true, or is it the revolution we need? We’ll dig into the details to help you decide.

The benefits of a 4-day work week

For many employees, a 4-day work week sounds ideal. Whether it’s a day off mid-week to recharge or a three-day weekend every weekend, from an employee’s perspective, many of the benefits of a 4-day work week are self-evident. It means more time to rest and recuperate, the freedom to spend more time with family and friends, and the ability to implement a healthier work-life balance. Thus, it should come as no surprise that 66% of workers want to work less than five days a week.

Below, we’ll take you step-by-step through the benefits of a 4-day work week.

For many workers, flexible working arrangements are now non-negotiable. COVID gave them a taste of hybrid work, and they don't want to return to the old norms. A whopping 75% of workers say they want to maintain flexibility over their working schedule going forward. At this stage, flexibility has mainly extended to where people work (i.e. working from home vs working in an office). However, employees also want greater flexibility over when and how they work.

According to Adecco, calls for a shorter work week are increasing. More than half of workers (57%) say they could do the same job in less than 40 hours, while 72% want employers to revisit the length of the working week.

As a result, many employees want to shift from an hours-based culture to an outcome-based culture. In other words, they want to be judged on the quality of their output, not the number of hours they work. 73% of people say employee contracts should focus more on meeting the core needs of the role and less on the number of hours worked. Despite this, only 36% of non-managers feel their managers assess their performance based on results.

A 4-day week is likely to play a central role in this transition, affording workers far greater flexibility to work on their own terms while still delivering high-quality output.

For further insights into why employees are demanding greater flexibility, see our articles on The Great Resignation and The Great Re-evaluation.

A common criticism of the 4-day week is that it will harm productivity. If people are working less, how can they be as productive? In reality, the opposite is true. Our brains need breaks to maintain productivity, with trials consistently showing the 4-day week improves, rather than harms, engagement and productivity.

A study from Iceland found that when workers reduced their hours from 40 to 35 per week, productivity stayed constant or rose in most workplaces. Likewise, Microsoft Japan tested a 4-day work week and saw productivity increase by 40%.

Similarly, when New Zealand trust management company Perpetual Guardian switched to a 4-day week, they reported a 20% gain in employee productivity. These statistics show there is no strong correlation between hours worked and productivity.

In fact, according to the OECD’s rankings, some of the world’s most productive countries, such as Norway, Denmark, Germany, and the Netherlands, work between 27-30 hours per week on average — about the same as a proposed 4-day work week. 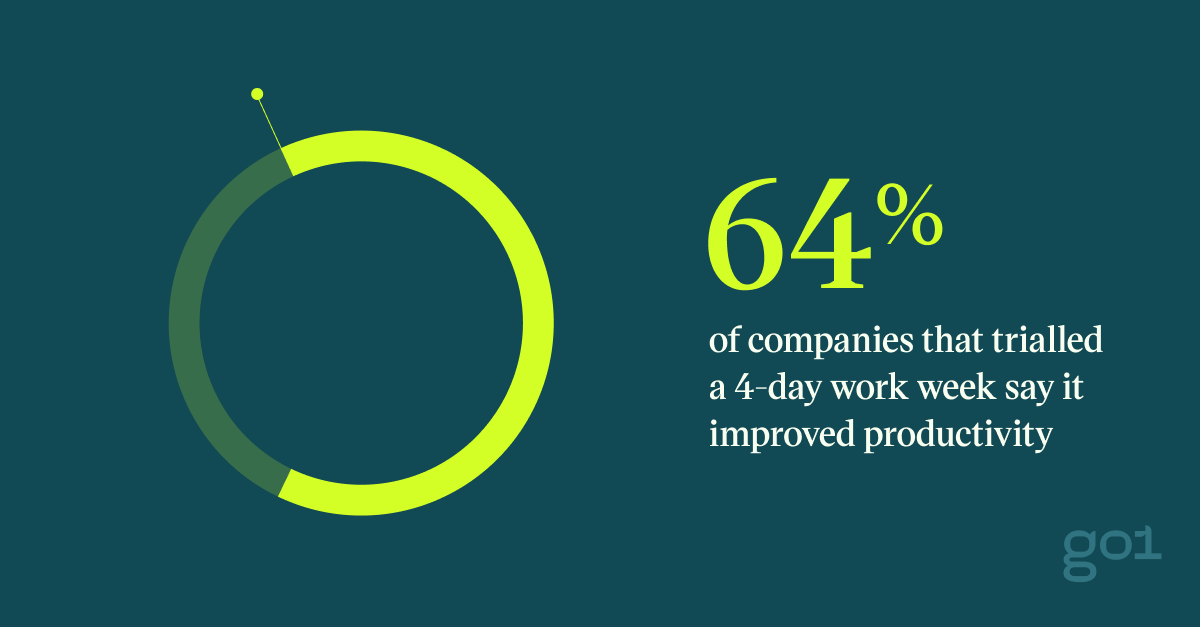 Further, 64% of companies that have trialled a 4-day work week say it improved productivity, while 51% say it reduced costs.

How does this happen? While it seems paradoxical, more hours does not lead to more productivity. Eventually, you reach a point of diminishing returns. According to some research, 55 hours of work per week is the absolute upper limit of productivity, although less is ideal. After that point, studies suggest that someone who works 55 hours per week and someone who works 80 hours per week will have very similar outputs. 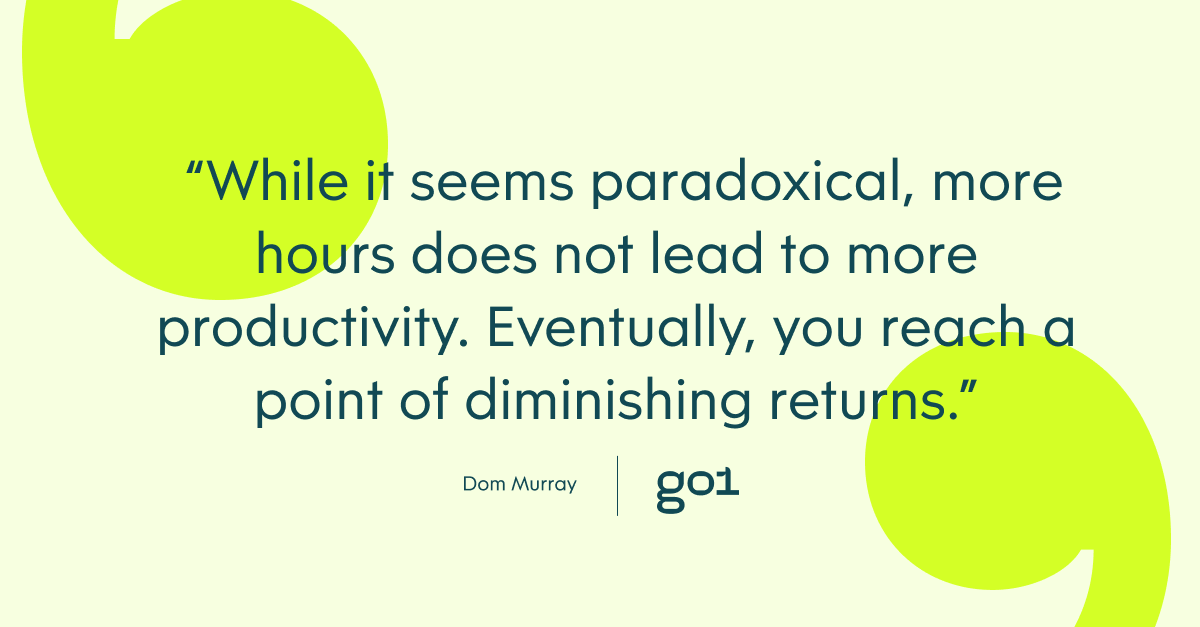 Put simply, our brains are designed for sprints, not marathons. They need time to rest, reset, and consolidate knowledge. It’s often during these moments that our best ideas suddenly come to us — those brilliant ‘lightbulb’ moments.

For more analysis on why a 4-day work week can increase productivity, check out our article on why our brains need breaks to maintain productivity.

Other companies that have adopted or trialled a 4-day work week have also seen encouraging results.

For example, when Perpetual Guardian switched to a 4-day work week, employee stress levels decreased from 45% to 38% on average. Similarly, when Treehouse shifted to a 4-day week, their employees reported a 50% increase in time for family and hobbies.

When Sweden trialled shorter working hours between 2015 and 2017, the results were equally encouraging. Nurses at a care home worked 6 hours per day over a 5-day week. As a result, they logged fewer sick hours, reported better health and mental wellbeing, and showed greater engagement, as they arranged 85% more activities for patients.

These statistics are only the tip of the iceberg, as research by Henley Business School finds that among companies that have adopted a 4-day week, 78% of staff were happier, 62% felt healthier, and 70% were less stressed. What’s more, shifting to a 4-day week has already saved UK businesses approximately $92 billion annually, with similar numbers projected globally.

Switching to a 4-day week has also had unforeseen environmental benefits. In addition to boosting productivity by 40%, when Microsoft Japan transitioned to a 4-day work week, electricity costs fell by 23%, while they also printed 60% fewer pages.

A trial for government employees in Utah saw similar environmental benefits. By closing their office on Fridays, they saved $1.8 million in energy costs in just ten months, leading to a reduction of at least 6,000 metric tons of carbon dioxide emissions. When employee commutes are factored in, Utah estimated it would save 12,000 metric tons of CO2 by working one day less per week.

Likewise, a study by the University of Massachusetts predicts that "if we spent 10% less time working, our carbon footprint would be reduced by 14.6%, largely due to less commuting or grabbing high-carbon convenience foods on our breaks." Henley Business School’s report corroborates this, finding that if a 4-day work week was the norm, employees in the UK would drive nearly 900km less per week on average, leading to fewer transport emissions.

When to be wary of a 4-day work week

Unfortunately, the 4-day work week is not all long weekends and extra productivity. While the benefits generally seem to outweigh the detriments, there are still a few potential drawbacks of a 4-day work week that companies should consider.

Firstly, implementing a 4-day work week can be complex and time-consuming. To ensure a smooth transition, companies need to create new schedules, write new policies, introduce new ways of working, and make many other logistical changes. While this is not a reason to write off the 4-day work week altogether, teams should be aware that it can be a complicated and time-consuming transition, meaning it might not be suitable for all businesses.

The resources required to transition to a 4-day work week also mean it may not be cost-effective for some businesses. For example, when Sweden trialled shorter weeks for nurses, the trial was ultimately deemed not to be cost-effective.

It is also worth noting that a 4-day work week is not currently viable in every industry. Professions such as doctors need to be available throughout the week, while many customers expect services to be open five days a week. When Utah government departments trialled a 4-day work week, the project was discontinued because customers complained they couldn’t access services on Fridays, even though the trial produced many positive results regarding environmental impact and employee wellbeing.

Finally, while many trials have shown that a 4-day week can boost productivity despite working fewer hours, concerns abound that a 4-day week could lead to longer hours crammed into a shorter week. For instance, when Uniqlo trialled a 4-day week, employees were still required to work 40 hours per week. The same is true at Deloitte: the company has adopted an optional 4-day week, but employees need to work 10 hour days.

Examples such as these have stoked fears that a 4-day week will lead to more burnout and stress, not less, as employees cram longer hours into a compressed schedule. Many employees already work more than their scheduled 40 hours per week to stay on top of their workload. Therefore, there are concerns that a 4-day week could force employees to work 12+ hour days to meet deadlines.

Ultimately the 4-day work week has significant benefits for productivity, employee wellbeing, and even environmental impact. However, the resources required to adopt this model may preclude some businesses from switching to a 4-day week in the short term. Additionally, many are concerned that a 4-day week will result in longer hours and overworked employees, at least initially, as companies adjust to the idea that more hours does not necessarily equal more output. If you're considering adopting a 4-day week, it's important to carefully weigh up these factors and decide which model is most suitable for your team's unique needs.

For more insights, be sure to subscribe to the Go1 newsletter to stay on top of all the latest L&D trends. Or, you can book a demo today to find out how Go1 can support your team’s learning needs.