Gain insight into why people leave a role and what steps employers and HR professionals can take in order to retain their staff.
Kerrie-Anne Chinn, Content & Editorial Manager
2022-09-02

The ability to work remotely has made job-hopping easier than ever. According to LinkedIn’s 2022 research, the number of U.S LinkedIn users who changed their jobs increased by 37% in 2021. Gen Z workers, (those born in 1997 or later), were the ‘most restless’ and 25% of respondents said they hope or plan to leave their current employers within the next six months.

With this in mind, we’ve surveyed over 2,000 workers who have changed jobs at least once in their career to gain insight into why people leave a role and what steps employers and HR professionals can take in order to retain their staff.

The top reasons for employees resigning

For employers to retain their employees, they need to understand the reasons why people decide to quit. When a company has a high turnover rate, this could signify low employee job satisfaction, and hiring new employees to fill these openings requires a lot of time and effort.

Our study found that there are a number of reasons why employees resign. Earning more money is the top reason for over four in ten respondents (44%). However, money is not the only factor.

32% want a better work/life balance - for 3 in 10, this even means opting for a complete career change. Finding a career that brings meaning is a priority for 1 in 5 respondents. 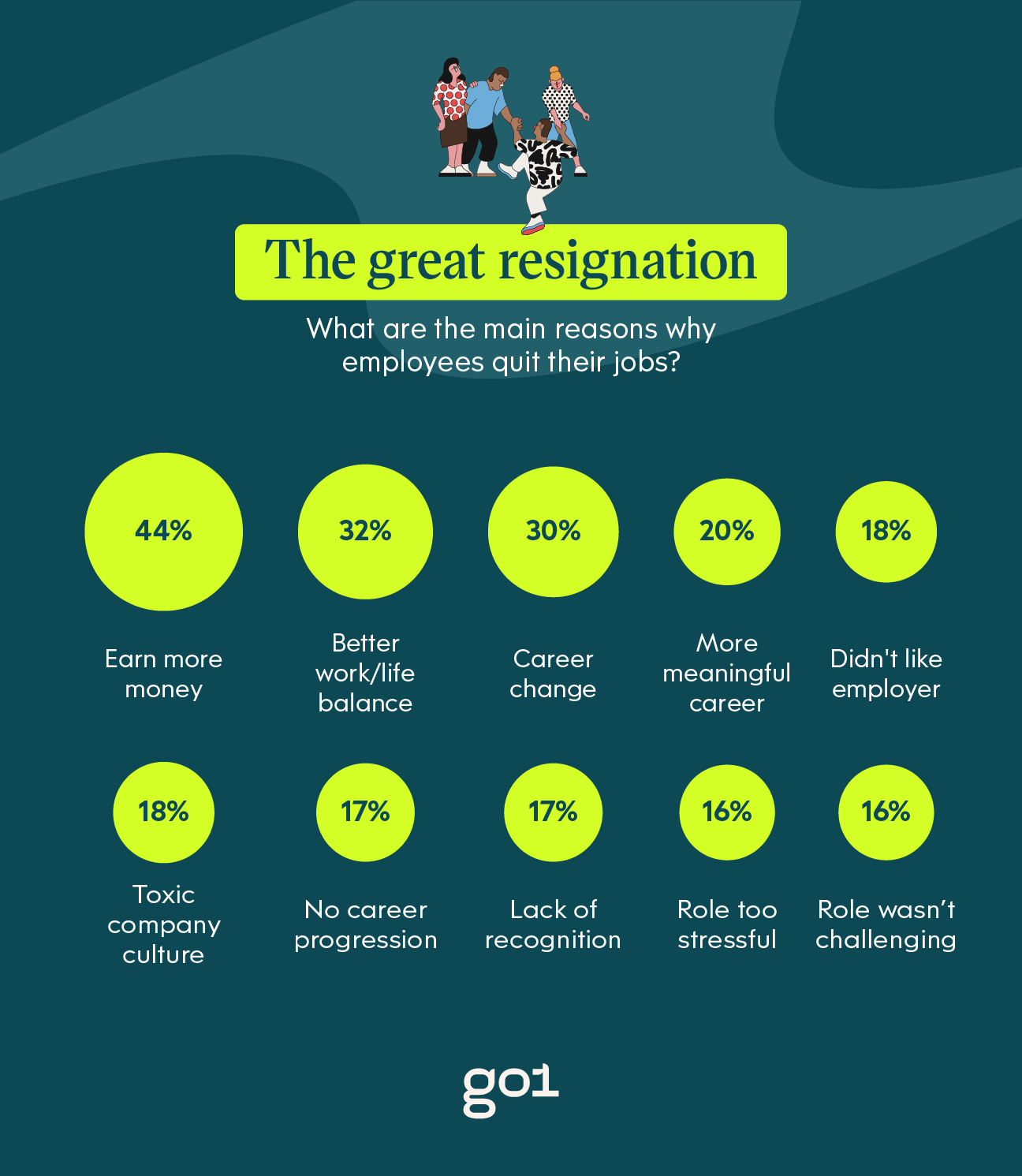 With specialised talent already in short supply, it is more critical than ever for employers to ensure their employees can clearly see their potential to advance in their careers. All too often, career planning discussions begin too late for employees.

Employers should provide their employees access to a professional development program as soon as they start, and review their progress every 6 weeks. The appetite is clearly there, with almost 4 in 5 (78%) employees agreeing they’re happy to learn new skills whenever they can during the working day. During an employee’s review, a manager could ask them what knowledge and skills they need in order to achieve the role they are working towards. Are there certifications or qualifications needed? And are there any soft skills, such as communication or leadership qualities, they would like to enhance?

Our research revealed that some industries are not offering their workers clear career paths, which is one of the top 10 reasons why people are quitting their job.

On the move: an employee's average length of time in a job

Long gone are the days when people would stay at one job for their entire career. Increasingly, changing jobs every few years is considered the new average time in employment, and it varies per generation.

Our survey found that Gen Z is far likelier than Boomers to job-hop, with the average length of time in a job just 1.7 years. Millennials are switching things up after 3.2 years on average, and Gen X after 4.3 years. Baby boomers are likely to spend the longest in a job, at 5.7 years. 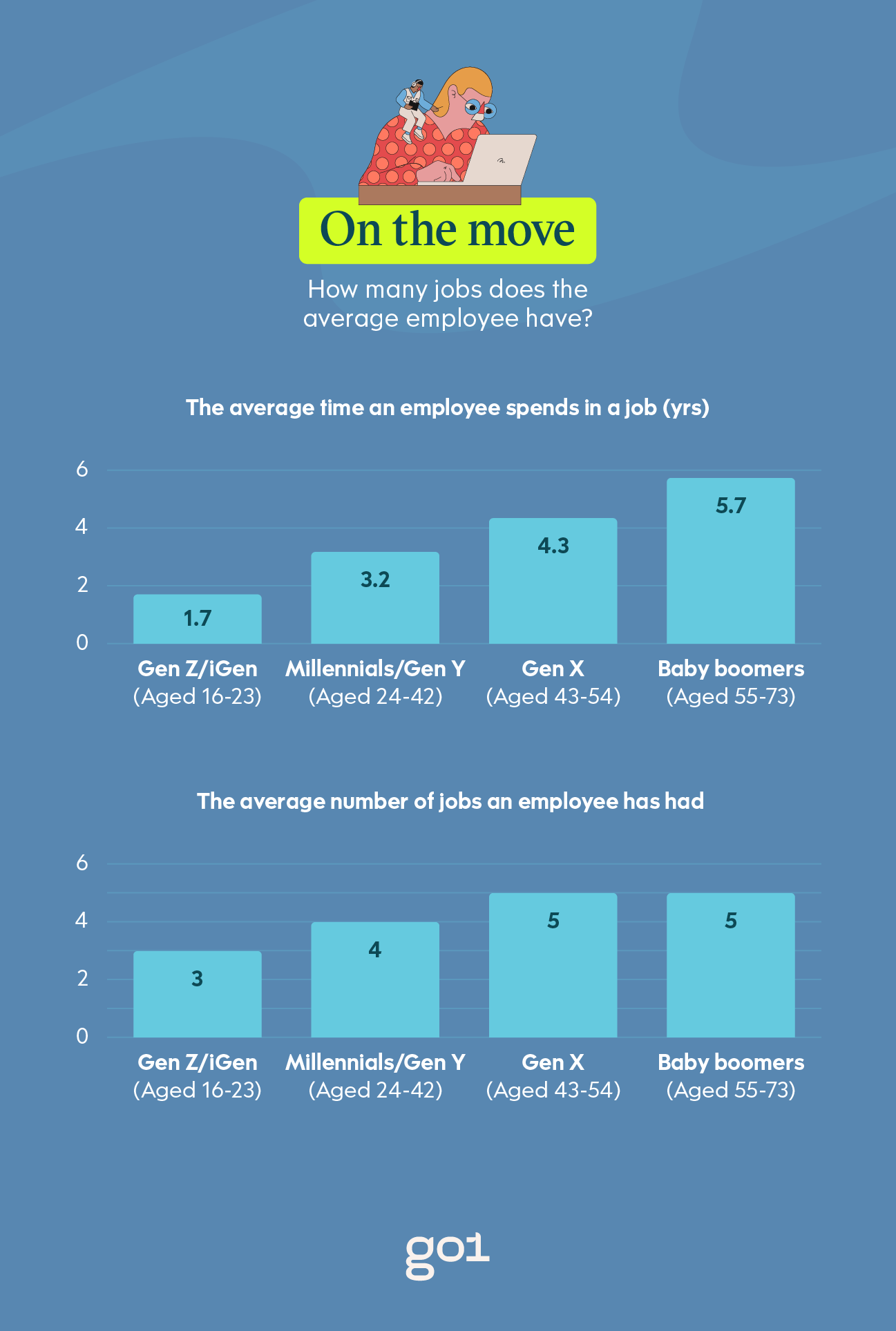 Giving notice: how long employees are unhappy before deciding to leave

In order to keep employees happy and stop them from leaving, more emphasis needs to be put on training. 60% of 16-24-year-olds admitted they have left a job due to limited growth opportunities, and 36% of respondents said managers should hold regular 1-2-1 sessions with each team member to review their development.

In particular, the younger generations won’t stick around waiting for better leadership and management. On average, Gen Z will only stay in a role they’re unhappy in for just over 4 months before resigning. Millennials are likely to stick it out slightly longer, waiting just under a year (11.2 months) before leaving, whereas Gen X will wait for just over a year (12.5 months) and baby boomers 17.6 months. 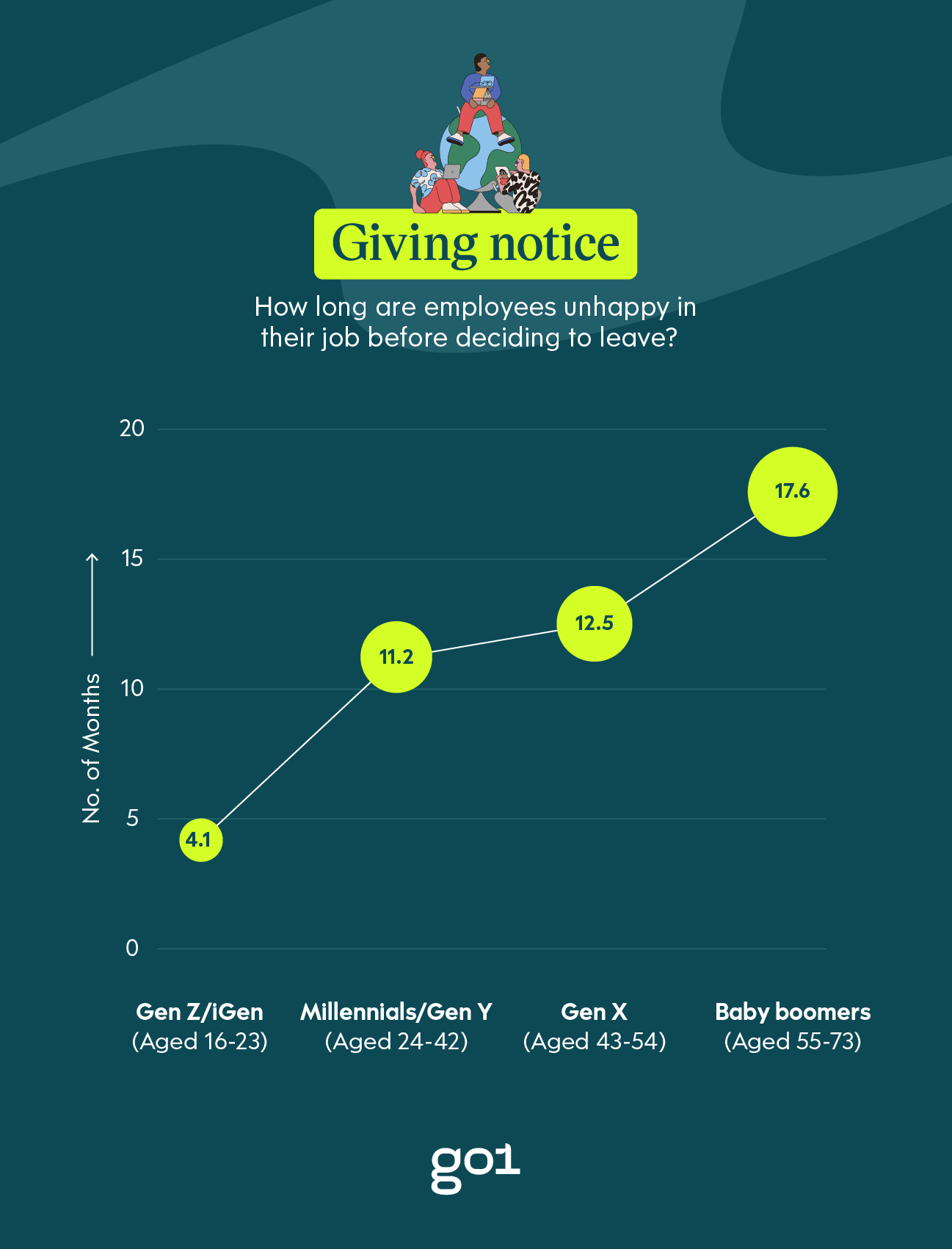 Retention rates: Which industries are employees not job hopping?

The average cost of losing an employee can have a significant financial impact on a business. According to research by Oxford Economics and Unum, the average cost of turnover per employee (earning £25,000 a year or more) is £30,614. And as more people quit, company culture also suffers, as existing employees feel the added stress of taking on extra work until the business successfully recruits.

Turnover in any department can be stressful, but being prepared can help business owners set expectations and plan ahead to improve retention in the future. Our survey revealed which industries currently have better staff retention rates by uncovering the employees with the least amount of previous roles held for each industry,

Nearly half of people aged 55+ (49%) said they want to learn more skills in the near future, proving it’s never too late to learn something new. But at what age do people think it’s too late to change jobs?

Our study revealed that people are happy to change jobs, including later in life - 72% of respondents believe it’s not too late to change jobs by the time you’re 60. Access to online education and eLearning makes it easier to seek out new jobs at any age. After all, no matter what age you are, there is always something new to learn. 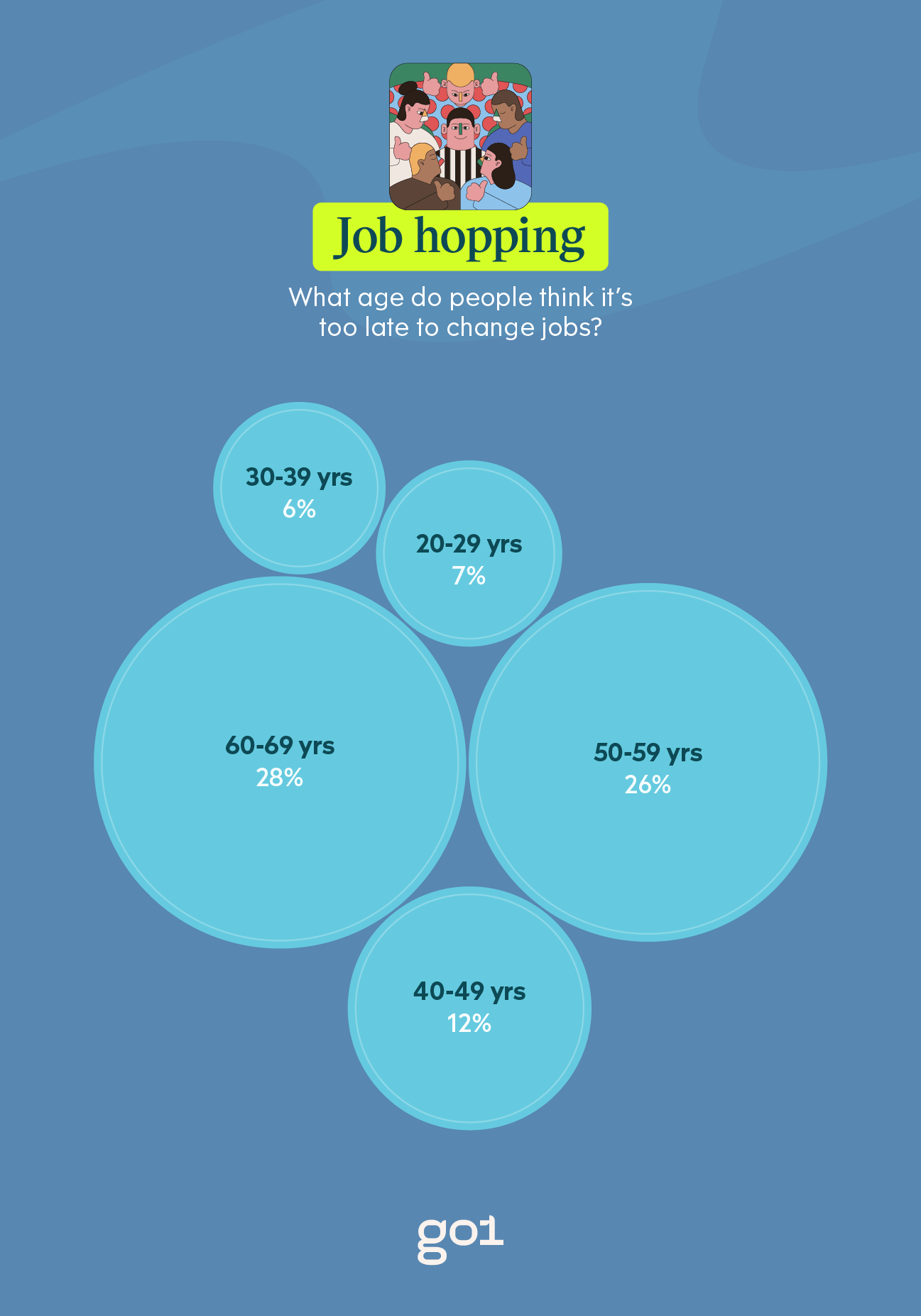 It's clear from our findings that taking the time to understand exactly why employees are unhappy, whether it’s because of a lack of training or recognition for their work, can help win their trust back. It can also help paint their future at the company by demonstrating a commitment to change those factors and therefore lower retention rates.

Survey data was conducted by Censuswide on behalf of Go1. 2,007 workers in the UK who have changed jobs at least once in their career were surveyed between 17.06.2022 and 21.06.2022. Censuswide abides by and employs members of the Market Research Society which are based on the ESOMAR principles.