International Women’s Day 2020: an equal world is an enabled world

In honour of International Women's Day, we’ve created the Go1 IWD Pathway - a collection of online training resources to help you raise awareness of the importance of gender equality and inclusivity within your organisation. Online training is a great way to effectively communicate to employees and engage them in this important discussion.
Kerrie-Anne Chinn, Content & Editorial Manager
2020-03-09

Each year, on 8 March, we observe International Women’s Day across the world.

For many, it’s a day to celebrate the social, political and cultural achievements of women all over the world. For others, it’s an important call-to-action to continue pushing for gender equality and a reminder to reflect on what’s been achieved - and what work still needs to be done. Many people believe that gender equality has already been achieved. However, this is unfortunately not the case. In fact, according to the Global Gender Gap Report 2020, gender parity will not be attained for another 99.5 years. This means that’s it’s very unlikely we’ll see gender equality achieved within our own lifetimes.

It’s really important to realise that gender equality improves things for everyone. For society as a whole.

As the Global Gender Gap Report 2020 says, “gender parity has a fundamental bearing on whether or not economies and societies thrive. Developing and deploying one-half of the world’s available talent has a huge bearing on the growth, competitiveness and future-readiness of economies and businesses worldwide.“

Let’s pause and think about that. Gender equality is essential for economies and communities to thrive.

So where do we get started, to work towards that goal as a collective?

Accelerating gender equality in the workplace

One of the key areas in which we still see a lack of gender equality is in the workforce.

While today, 87% of companies are highly committed to gender equality - a huge increase from 56% in 2012 - many challenges women remain, including the persistent gender wage gap, an under-representation of women in leadership and the tech industry, and the impacts of sexual harassment, discrimination and gender stereotyping.

With this year’s IWD theme, there is a strong focus on 'collective individualism' - the idea that we are all parts of a greater whole. And that our individual actions, conversations, behaviours and mindsets can have an impact on our larger society.

As renowned journalist and activist Gloria Steinem said, "the story of women's struggle for equality belongs to no single feminist nor to any one organisation but to the collective efforts of all who care about human rights.”

Here are some positive actions you can take in your workplace - whether you’re an employer, manager, or employee - to create steps towards a culture of gender equality.

How employers and managers can promote gender equality

If you’re an employer or manager, you’re in a strong position to take action on this issue. There are many things you can do to accelerate gender equality within your organisation, creating positive change on a higher level in the process.

As a start, you can:

How employees can support women in the workplace

It’s not just CEOs and employers who can make a difference in improving gender equality in the workplace. Employees are also encouraged to look closely at how their female colleagues are treated and valued in the workplace.

Individuals – both women and men – can choose to create powerful positive change within their own spheres of influence. In recent years, we are seeing more men becoming better champions and allies for equality, helping to accelerate gender equality in the workplace.

Remember, you have a voice and the right to speak up about gender inequality and bias when you see it. Let International Women’s Day be a positive reminder to celebrate women’s achievements across the world and advocate for a more gender inclusive world – every day of the year.

With continual, ongoing action in this area we can help to drive better outcomes for women and change lives around the world.

This year, we’ve created the Go1 IWD Pathway - a collection of online training resources to help you raise awareness of the importance of gender equality and inclusivity within your organisation.

Online training is a great way to effectively communicate to employees and engage them in this important discussion. Interested to learn more? Reach out to a Go1 representative. 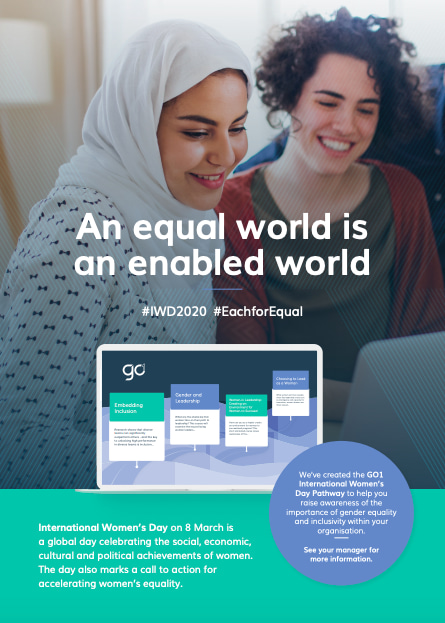